Sometimes it seems that teens have the impulse control of a, well, teenager. One moment, they seem like rational human beings and then they do something so incredibly reckless, you cannot help but wonder what they were thinking. Fortunately, there’s a scientific answer: it’s all about the brain.

Educating Your Teen about Impulse Control

The teenage brain is still in the process of developing. This process not only leads to teenagers pushing boundaries and searching for individuality; it promotes risk-taking behaviors with little regard for consequence. The behaviors can range from mood issues resulting in confrontation and “borrowing” without asking, to substance abuse, kleptomania, compulsive sexuality, and many others.

As a parent of a teen with impulse control issues, there are several steps that you can take to make the problem easier. Typically, impulse control comes with age; however, a few tips can help relieve tension until that time comes. The most important thing to remember is to stay positive. As with many other situations, by losing your temper, you only add fuel to the fire; what could have been a calm discussion turns into a power struggle. 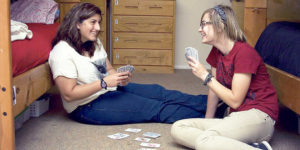 Try to keep communication open. While it may be tempting for a parent to simply lay down the law, a real conversation is a two-way street. Setting a strict system of cause-and-effect (break the rules, deal with the consequences) does not teach your child why impulse control is important; sitting down and talking about the effect of recklessness does. Even though there are situations when remaining patient can prove difficult, in the end, the best way to teach your child impulse control is to exhibit impulse control yourself.

If your teen is struggling with controlling their impulsive behavior, Solstice can help. Solstice is a residential treatment center for teen girls ages 14-18 struggling with emotional and behavioral issues like defiance, ADHD, substance use, and trauma.

Is your teen constantly on a new diet? Is she always looking for a new way to cut carbs and lose a few pounds? Sometimes, trying to eat healthier is a good thing. However, if your teen is taking dieting very seriously it might be time to start worrying. Why? Because your daughter may be experiencing disordered eating.

Spotting disordered eating in your daughter

Disordered eating is defined as a wide array of irregular eating behaviors that don’t warrant a diagnosis of a specific eating disorder like bulimia nervosa or anorexia nervosa. Studies have shown that nearly 50 percent of the population demonstrates disordered eating. How can you tell if your daughter is dealing with this struggle? The answer to that question is complicated. Symptoms include:

Disordered eating vs. an eating disorder

However, you should be just as concerned for your daughter with disordered eating. Disordered eating can lessen your daughter’s ability to concentrate and focus (which is terrible for high school students trying to make good grades). It may impede on your teen’s social life because they refuse to break out of their diet or exercise regime to make time for friends. For some teens, disordered eating is a way to cope with anxiety or stress coming from some other aspect of their lives.

If your teen is suffering from eating issues, she may need professional help to overcome whatever is influencing her harmful eating behaviors. Solstice can help your daughter work through whatever struggles are causing your teen’s eating issues. Solstice is a residential treatment center for teen girls ages 14-18 struggling with emotional and behavioral difficulties.

For a teen, having friends is pretty much all that matters. Being part of a family becomes less and less important, as teens distance themselves from family members. Peer pressure comes into play as teens become influenced by their friend circles. This can be a positive influence, but the thing parents need to be concerned about is the negative influence of peer pressure. 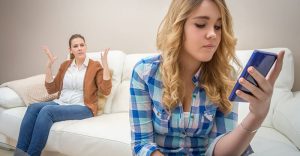 Teen peer pressure can be dangerous

The peer pressure teens face can lead them into unhealthy behaviors, such as substance abuse and speeding. This is mainly because teen brains take more pleasure in social acceptance than adult brains. Because of this, teens are more likely to succumb to the pressure put on them by their peers.

According to a study conducted by the University of Michigan, teens might feel the effects of peer pressure more intensely from their close friends, as opposed to a group of their peers, because they care about them and value their opinions. Pressures from a best friend can feel more forceful and intimate than that from a larger group.  For example, if a teenage girl’s best friend started drinking because she has joined a new social group, she might have a hard time saying no if her friend pressures her to have a drink. She might not want to lose her best friend to this new group of friends. If she has this fear, it is likely she will drink.

The positive side of teen peer pressure

Peer pressure also has a positive connotation, as teen girls might  be influenced by their peers to do positive activities, such as joining a new club or helping out in the community. These new activities that can assist in building strong pathways in the brain.

As described in the article, “Teens and Decision Making: What Brain Science Reveals,” neural connections that are weak or not used very often are removed during the teen years through a process called synaptic pruning, which allows the brain to redirect valuable resources toward more active parts of the brain. Because of this, teens can, through new choices and behaviors, shape their own brain development. Through peer pressure, teens are often encouraged to engage in skill-building activities, such as sports or debate, that can not only provide challenges that stimulate the brain, but can also build stronger pathways within the brain, leading to greater academic success for the future.

The effects of peer pressure, although sometimes positive, can be damaging to your teen’s self esteem and daily habits. If your teen has fallen into negative activities due to peer pressure, such as substance abuse, Solstice can help. With our specialized, clinically intensive residential treatment program, we can provide your teen girl with the help she needs to overcome peer pressure and begin her path toward healing.